The San Francisco Arts Commission is working on behalf of Treasure Island Development Authority to commission a large-scale public artwork for Yerba Buena Hilltop Park, which is to be located at the top of Yerba Buena Island. The newly commissioned artwork is intended to enhance the viewer’s experience of the natural setting and function as a focal point for the built landscape. This work will be monumental in scale whether through its verticality or through a horizontal series of related sculptural installations. Three artists were chosen as finalists by a Public Art Selection Panel to create site-specific proposals for the Yerba Buena Hilltop Park opportunity: Chakaia Booker, Andy Goldsworthy, and Hiroshi Sugimoto.

Hilltop Park on Yerba Buena Island is a place where visitors can appreciate the views of San Francisco, Oakland, and the Bay Bridge. Visitors can contemplate the former agricultural, the industrial, and the military history of the Island as well as observing the ebb and flow of their current lives and their relationship with the re-development of the site.

A symbolic contemporary version of a cornucopia or horn of plenty speaks of the past visions and the re-visioning of the Yerba Buena Island today. The “Untitled” sculpture is also intended to capture the vista like views observing remnants from the past and a portal to navigate through to the inexhaustible possibilities. Free standing the sculpture is installed at a point of vast ecological change for the San Francisco Bay area. Recycled tires are part of that ecological voice. A contemporary material is used in the construction of the sculpture. It flows into the sustainable development concept of renewable energy, conservation, green infrastructure, stormwater treatments, etc.

This monumental artwork 65 feet high x 24 feet long x 21 feet wide is created and constructed in a modular.format. It is designed in 20 sections. These will come apart at the studio and re-assembled together at the Hilltop Park. To construct the armature of the sculpture we will bend the stainless steel, then cut the metal into pieces of varied sections, design the form, and weld the sections together using 3/16 stainless steel round pipe. Bias and steel belted radial tires are deconstructed then processed into various shapes. The rubber tire material is cut into desired shapes, forms, and will be manipulated to fit the stainless steel armature.

The basic material used in the construction of this sculpture described above is rubber tire. Black rubber tires are ubiquitous and they are used here as a symbol of birth and rebirth; and renewal for the island. Metaphorically this sculpture radically transforms tires to bridge the islands past with its future ideas. The swirls of tires create an amalgamation of organic materials, visual textures and technology. The artwork will feel like a beacon drawing viewers up to explore the beauty of the landscape and the natural environment. 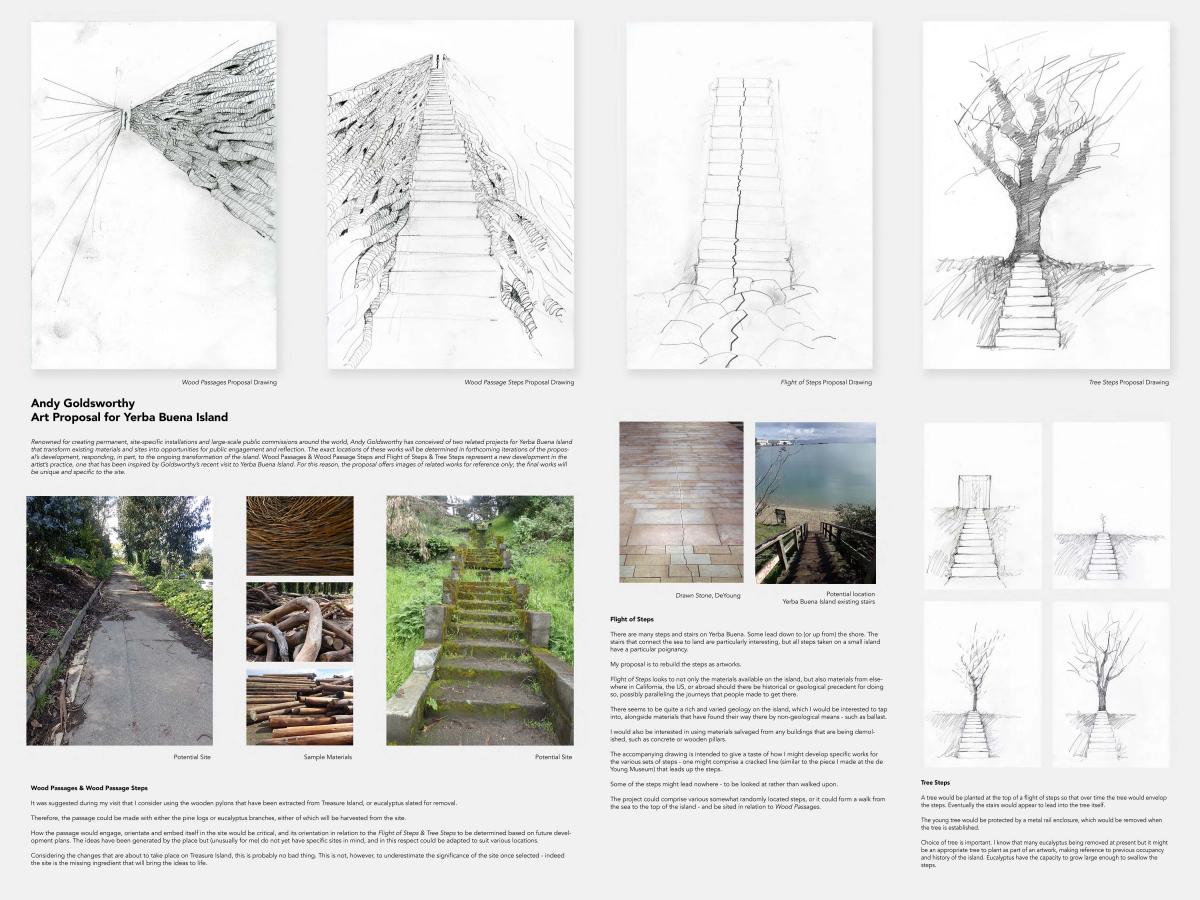 I have a short anecdote that might help give some background to the proposal that follows. When I was about seven years old we moved to a new housing development on the outskirts of Leeds, England, which was called Alwoodley. We lived on a street called High Ash Avenue (many of the surrounding streets were also incorporated the word ash – High Ash Drive, Crescent, etc.). There were neither tall ash trees nor extensive woodlands. These had been cleared to make houses. In the following years, most of the remaining woodland was cleared to make way for more houses. I remember feeling angry when the woods that I played in and the trees that I climbed were cut down. But I was also aware that my own home stood where a wood had once been and that by living there I was party to its destruction. Who was I to say that others could live there? Even so, I never forgot the woods where I once played and trees I once climbed. In my mind they still lay below the surface of the roads, gardens and houses.

A. Description of Proposed Artwork

It was suggested during my visit that I consider using the wooden pylons that have been extracted from Treasure Island, or eucalyptus slated for removal.

Therefore, the passage could be made with either the pine logs or eucalyptus branches, either of which will be harvested from the site.

How the passage would engage, orientate and embed itself in the site would be critical. Some of these drawings show the work and not the site. The ideas have been generated by the place but (unusually for me) do not yet have specific sites in mind, and in this respect could be adapted to suit various locations and continue to evolve over time.

Considering the changes that are about to take place on Treasure Island, this is probably no bad thing. This is not, however, to underestimate the significance of the site once selected – indeed the site is the missing ingredient that will bring the ideas to life.

There are many steps and stairs on Yerba Buena. Some lead down to (or up from) the shore. The stairs that connect the sea to land are particularly interesting, but all steps taken on a small island have a particular poignancy.

My proposal is to rebuild the steps as artworks.

Flight of Steps looks to not only the materials available on the island, but also materials from elsewhere in California, the US, or abroad should there be historical or geological precedent for doing so, possibly paralleling the journeys that people made to get there.

There seems to be quite a rich and varied geology on the island, which I would be interested to tap into, alongside materials that have found their way there by non-geological means – such as ballast.

I would also be interested in using materials salvaged from any buildings that are being demolished such as concrete or wooden pillars.

The accompanying drawing is intended to give a taste of how I might develop specific works for the various sets of steps – one might comprise a cracked line (similar to the piece I made at the de Young Museum) that leads up the steps.

Some of the steps might lead nowhere - to be looked at rather than walked upon.

The project could comprise various somewhat randomly located steps, or it could form a walk from the sea to the top of the island—and be sited in relation to Wood Passages.

A tree would be planted at the top of a flight of steps so that over time the tree would envelop the steps. Eventually the stairs would appear to lead into the tree itself.

Choice of tree is important. I know that many eucalyptus are being removed at present but it might be an appropriate tree to plant as part of an artwork, making reference to previous occupancy and history of the island. Eucalyptus have the capacity to grow large enough to swallow the steps. 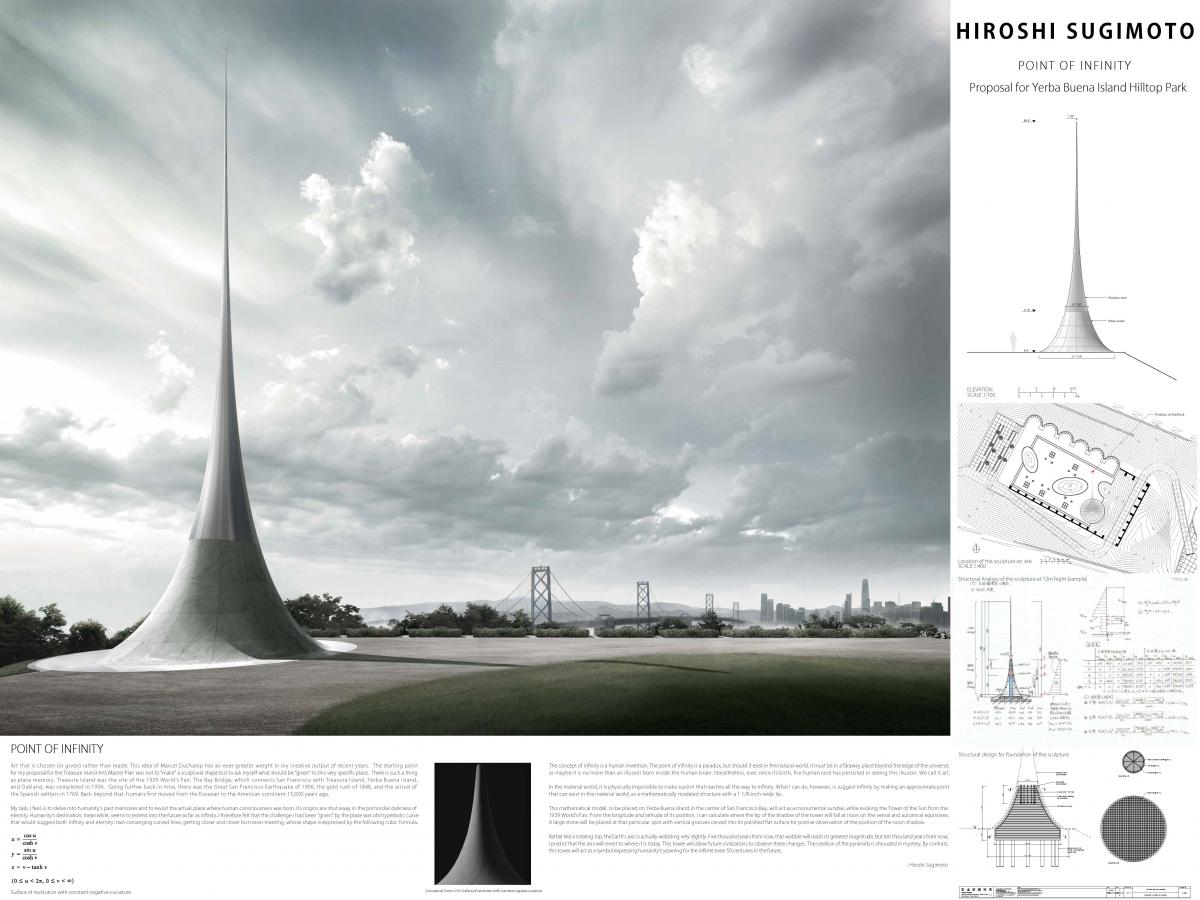 Art that is chosen (or given) rather than made. This idea of Marcel Duchamp has an ever-greater weight in my creative output of recent years. The starting point for my proposal for the Treasure Island Arts Master Plan was not to “make” a sculptural shape but to ask myself what should be “given” to this very specific place. There is such a thing as place memory. Treasure Island was the site of the 1939 World’s Fair. The Bay Bridge, which connects San Francisco with Treasure Island, Yerba Buena Island, and Oakland, was completed in 1936.  Going further back in time, there was the Great San Francisco Earthquake of 1906, the gold rush of 1848, and the arrival of the Spanish settlers in 1769. Back beyond that, humans first moved from the Eurasian to the American continent 15,000 years ago.

My task, I feel, is to delve into humanity’s past memories and to revisit the actual place where human consciousness was born. Its origins are shut away in the primordial darkness of eternity. Humanity’s destination, meanwhile, seems to extend into the future as far as infinity. I therefore felt that the challenge I had been “given” by the place was of a hyperbolic curve that would suggest both infinity and eternity: two converging curved lines, getting closer and closer but never meeting, whose shape is expressed by the following cubic formula. 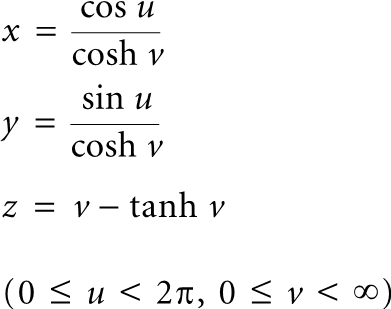 The concept of infinity is a human invention. The point of infinity is a paradox, but should it exist in the natural world, it must be in a faraway place beyond the edge of the universe; or maybe it is no more than an illusion born inside the human brain. Nonetheless, ever since its birth, the human race has persisted in seeing this illusion. We call it art.

This mathematical model, to be placed on Yerba Buena Island in the center of San Francisco Bay, will act as a monumental sundial, while evoking the Tower of the Sun from the 1939 World’s Fair. From the longitude and latitude of its position, I can calculate where the tip of the shadow of the tower will fall at noon on the vernal and autumnal equinoxes. A large stone will be placed at that particular spot with vertical grooves carved into its polished flat surface for precise observation of the position of the noon shadow.

Rather like a rotating top, the Earth’s axis is actually wobbling very slightly. Five thousand years from now, that wobble will reach its greatest magnitude. But ten thousand years from now, I predict that the axis will revert to where it is today. This tower will allow future civilizations to observe these changes. The creation of the pyramids is shrouded in mystery. By contrast, this tower will act as a symbol expressing humanity’s yearning for the infinite even 50 centuries in the future.