As transit riders descend into the Chinatown station, they will be greeted by two monumental artworks by San Francisco Chinatown-based artist Yumei Hou who is acclaimed for her intricate traditional Chinese paper cuts works. For the Chinatown – Rose Pak Station, Hou has transformed her paper cuts into two large laser-cut metal artworks painted a vibrant red, which are installed so that they stand slightly off from the wall to allow for shadow casting. The works, Yangge: Dance of the Bride and Yangge: Dance of the New Year, are inspired by the Yangge (Rice Sprout Song), a popular folk dance from the northern provinces of China, which typically involves groups of people dancing in a variety of costumes to celebrate happy occasions. Capturing the lively spirit of the Dance of the Bride, Hou features characters from a Manchu wedding celebration: a bride in a sedan chair, musicians, stilt walkers, and fan dancers. Bringing further playfulness and whimsy to the composition are a kitten, birds, butterflies, and plants adorning the artwork’s border. Capturing the celebratory spirit of the Dance of the New Year, Hou features characters from the 16th century Chinese novel “Journey to the West”: the Tang Monk, the Sand Monk, the Pig, and the Monkey King. Also portrayed are the dragon and lion dances, a stilt dancer with firecrackers, a Manchu shaman holding a peace drum, and other popular folk figures. The artwork on the upper mezzanine landing is approximately 16 feet high by 36 feet wide, the artwork at the ticketing hall is approximately 30 feet high by 35 feet wide. 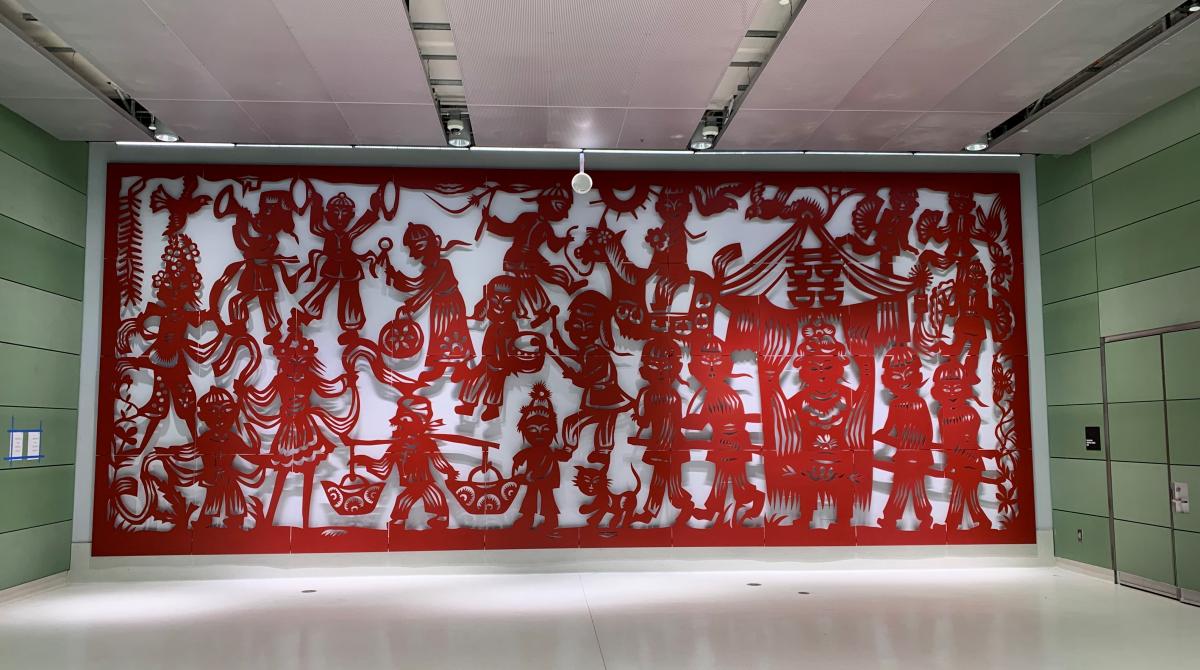 At the main entrance into the station and on the platform level, internationally renowned, New York-based artist and activist Tomie Arai's Arrival artwork for Chinatown - Rose Pak Station illustrates the life and history of the area surrounding the station through large-scale images translated into architectural glass. Upon approaching the station, transit riders will encounter contemporary imagery of the vibrant Chinatown community on the station’s parapet façade along Stockton and Washington streets. The artwork at the façade is approximately 100 feet in length with a height ranging from 9 feet to 4 feet.

At the entrance into the station, the work unfurls like a scroll across the three sides of the station’s parapet façade beginning with scenes from a garden symbolizing growth and sustainability; as the work turns onto Stockton and then Washington streets the design opens up to the port of San Francisco, early maps of Chinatown streets and businesses seen through transparent portraits of community members and maps of the United States and the world. Highlighted are images of students from the nearby Gordon Lau Elementary to signify a neighborhood in transition, moving towards a more global future.

The artwork continues at the platform level with glass panels approximately 17 feet wide and 15 feet high at each end of the platform. These works draw upon historical imagery illustrated through the traditional symbols for heaven and earth in Chinese culture – the circle and square. On the north platform wall, Arai includes images of the early settlement of San Francisco, the gold rush, immigration to the United States through Angel Island, and the great earthquake. On the south platform, the work celebrates the resilience of the community of Chinatown and greater San Francisco through a collage of images from 1906 to the present. 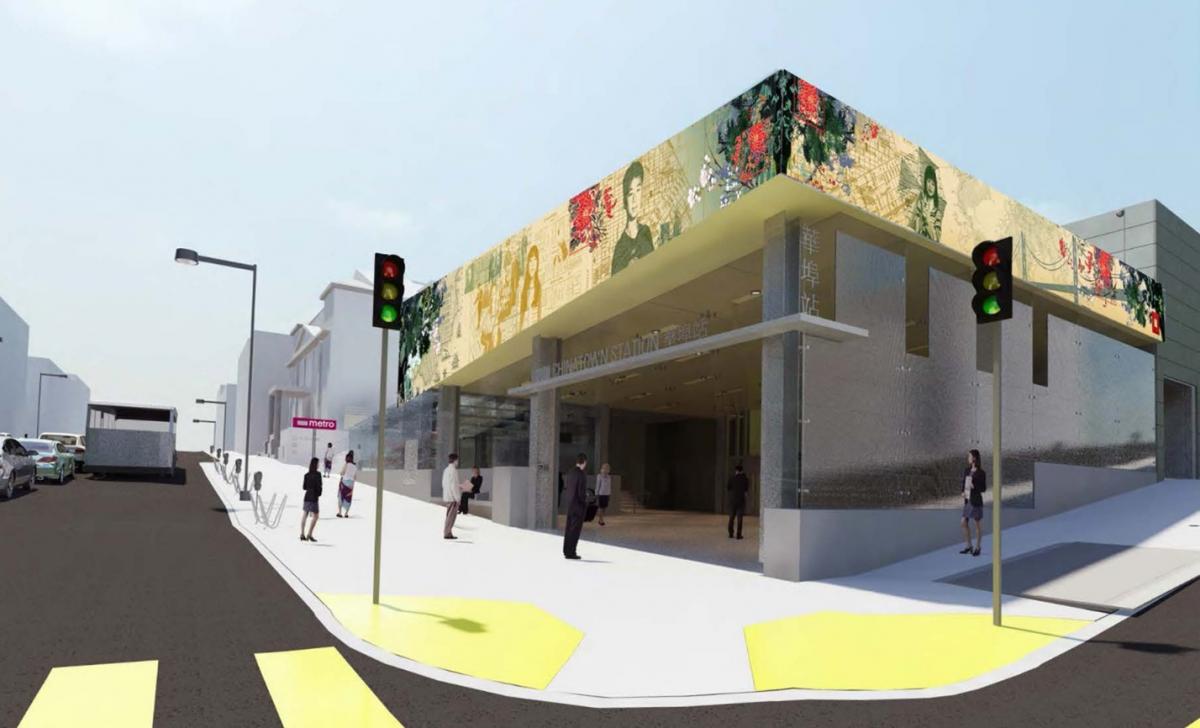 Acclaimed San Francisco Bay Area-based artist, Clare Rojas has created, A Sense of Community, a ceramic tile mural for the crosscut cavern wall at the concourse level of the Central Subway Chinatown - Rose Pak Station. Rojas’s, A Sense of Community, features a variety of unique Silk Road textiles patterned in the style of a cathedral window quilt. Sourced from art and design institutions, fashion designers, and local fabric stores, the swatches are framed within a small circle closely connected to those around it, resulting in a dynamic pattern that represents the Chinatown community held together by a common history and culture. The artwork is approximately 14 feet high and 35 feet wide. 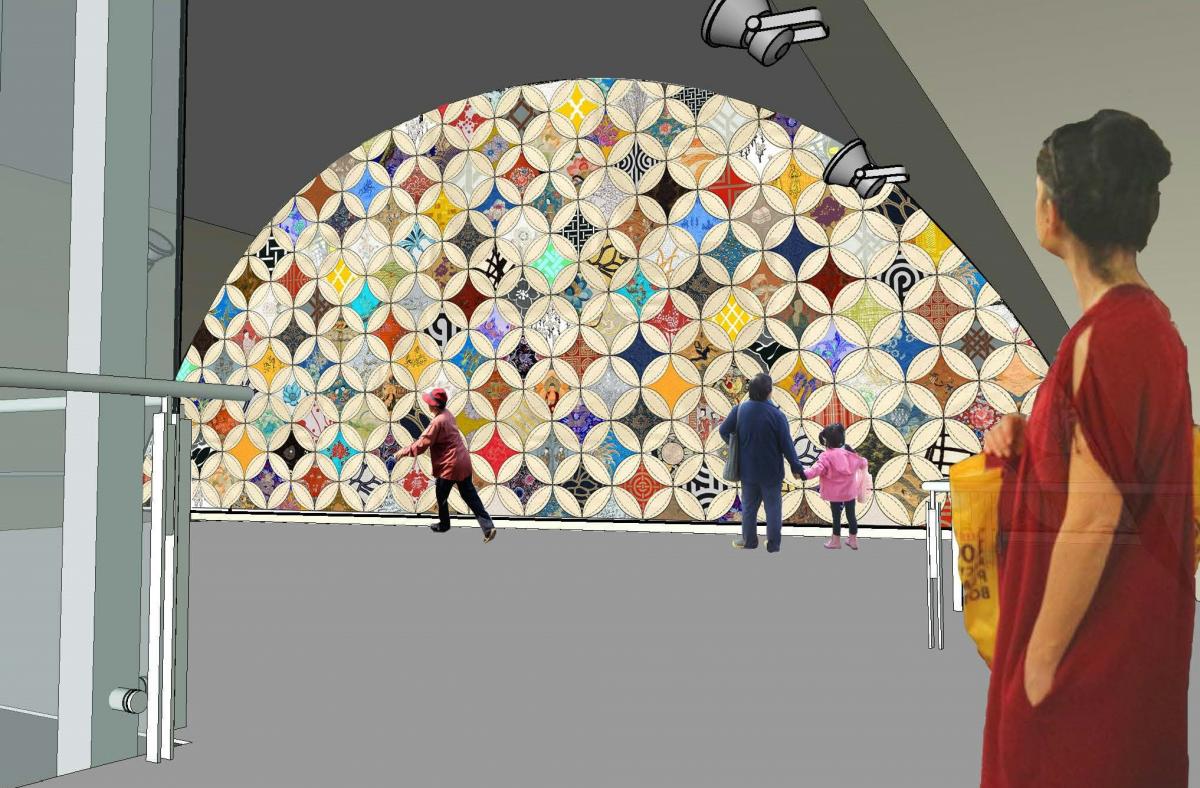 The immersive artwork, Lucy in the Sky, by Ohio-based artist, Erwin Redl for the Union Square/Market Street Station is an illuminated installation comprised of over 500 translucent 10 x 10 inch light panels, each containing an array of color LEDs. The panels are suspended along the entire length of the concourse level’s ceiling, spanning a distance of nearly 670 feet. The light panels, installed in a diamond-shaped pattern are computer programmed to slowly change color and display simple patterns, creating a kaleidoscopic experience. 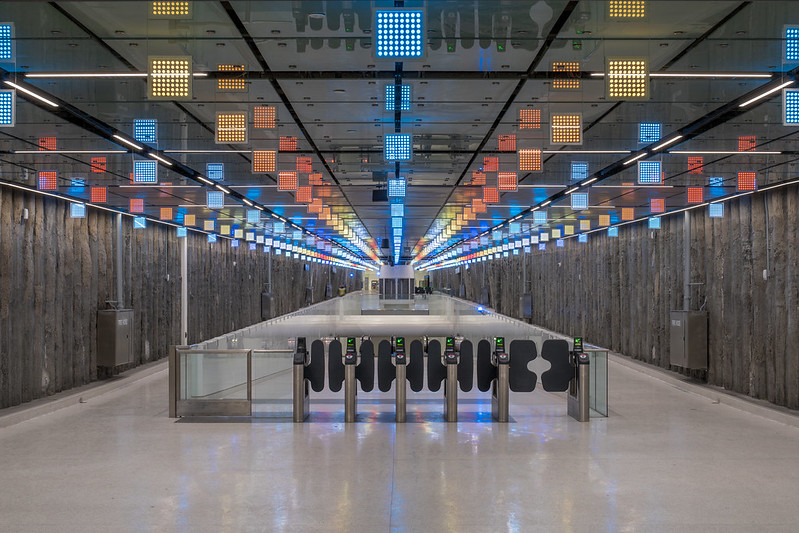 For the platform level of the Union Square/Market Street Station, world-renowned artists Jim Campbell and Werner Klotz have created Silent Stream, a site-specific suspended stainless-steel sculpture that resembles an underground creek flowing through the station. Approximately 250 feet in length and a width that varies from 4 feet to 8 feet, the sculpture, comprised of highly polished steel disks, winds its way through the struts along the length of the platform while reflecting the passengers and trains passing below. 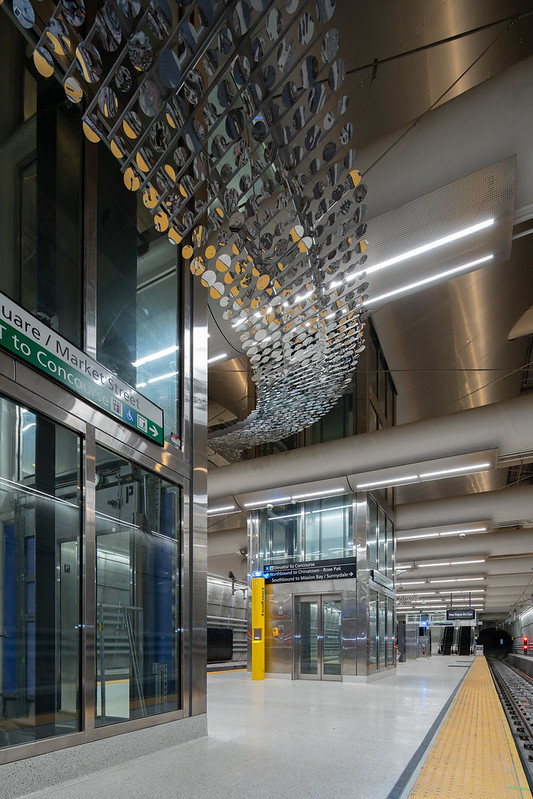 For the Union Square/Market Street Station, San Francisco-based artist team Hughen/Starkweather’s (Amanda Hughen and Jennifer Starkweather) artwork, Convergence: Commute Patterns, spans the façade, roof deck, and ceiling of the entrance into the Union Square Station. This site-specific glass artwork layers a precise topographic map of San Francisco with painted circles that reference Bay Area commute pattern densities. The commuter activates the artwork as they enter the subway station and descend underground, creating a real-time layering of abstraction (shapes and lines) and its source materials (commuters and topography). The title of the artwork, Convergence: Commute Patterns, refers to a convergence as a place where ocean currents or airflows meet, marked by an upwelling of air or a downwelling of water. Commuter movement can feel similar to the rising and falling tides of an ocean or bay as people enter and depart a city each day. 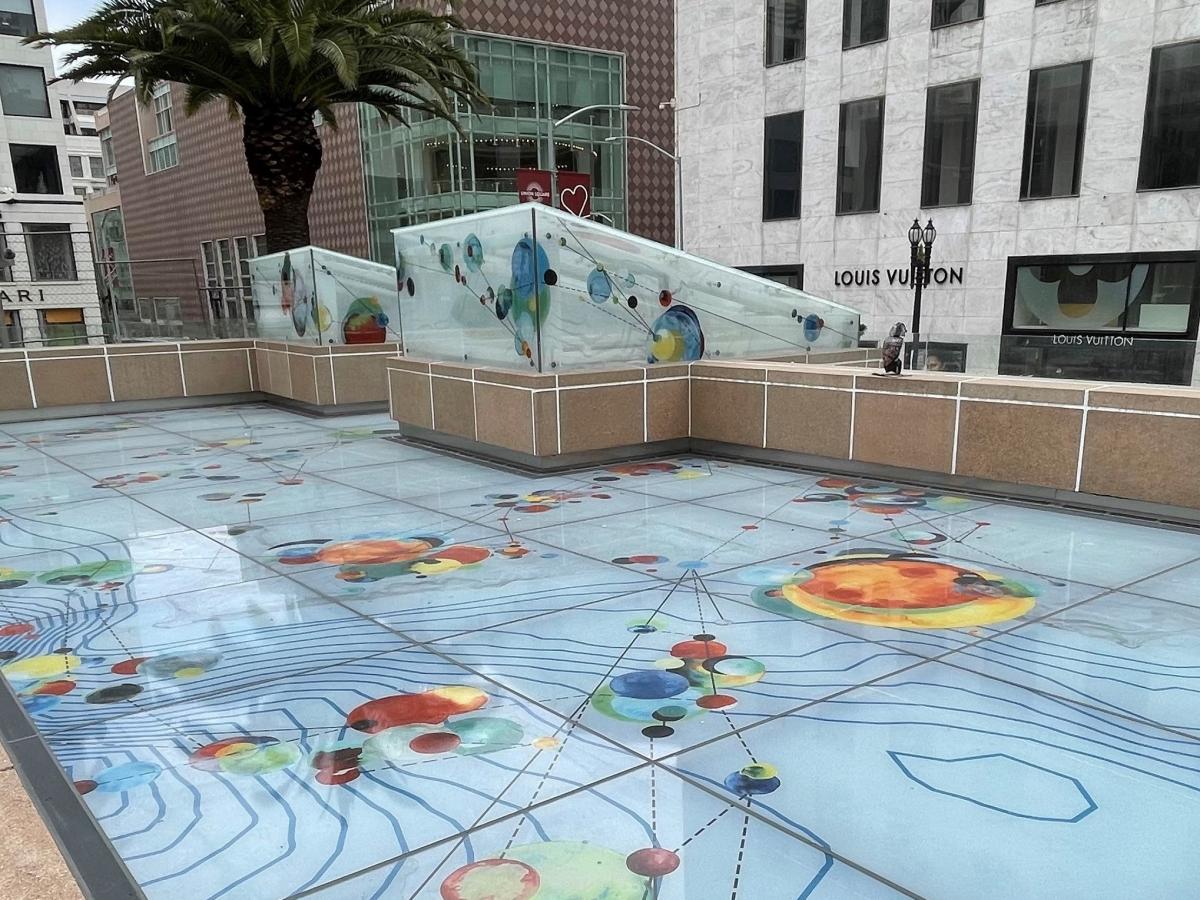 Internationally renowned artist Roxy Paine's sculpture, Node, located in the public plaza in front of the Yerba Buena/Moscone Station at 4th and Clementina Streets, will be installed in early 2023 and will function as a visual artistic landmark and a beacon marking the location of the station from blocks away. Paine’s curvilinear sculpture will emerge from the complex manmade structures existing beneath the sidewalk, which include the subway, communication networks, electrical and water supply, and waste systems that are all lifelines of a functioning city. Standing approximately 110 feet tall, Node tapers from a diameter of 5.5 feet at the base to ¼ inch at the peak, establishing a connection of earth to sky, people to station, and sculpture to city. 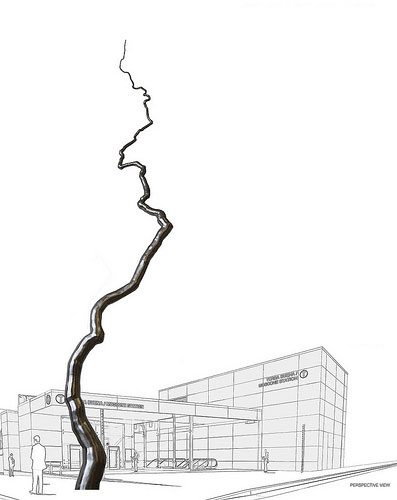 For the concourse level of the Yerba Buena/Moscone Station, internationally renowned Bay Area based photographer, Catherine Wagner, has translated several of her acclaimed photographs from the late 70s documenting the construction of the George Moscone Convention Center into multiple large-scale permanent works. Nearly 50 years ago, wielding a large-format camera and a grant from the National Endowment for the Arts, Wagner hung from scaffolding and employed any means necessary to capture the monumental construction effort in incredible detail. Today, Arc Cycle, Wagner’s site-specific work for the Central Subway, consists of 6 laser-etched granite artworks approximately 12.5 feet high by 10 feet wide at the concourse level, and art glass at the station’s entry at approximately 14 feet high by 26 feet wide. 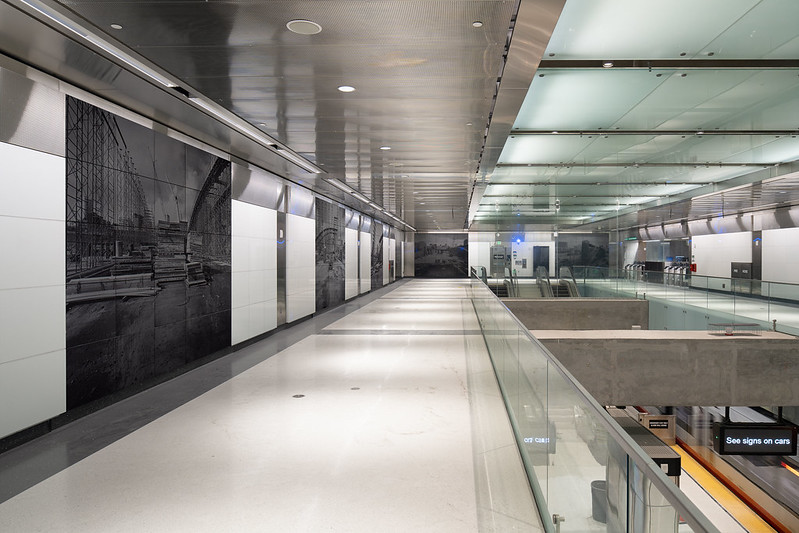 Featured in the ticketing hall on the concourse level of the Yerba Buena/Moscone Station, San Francisco-based mixed media artist, Leslie Shows has created Face C/Z, an integrated artwork approximately 35 feet wide by 14 feet high. Based on an image of iron pyrite made with a consumer grade scanner, Face C/Z was hand fabricated in a unique style combining mirrored, fused, painted, and engraved glass, sheet metal, and other permanent materials. The use of pyrite, also known as “fool’s gold,” speaks to ever-shifting notions of value in industry and aesthetics, the many gold rushes of the San Francisco Bay Area, and the alchemy of glass and light. 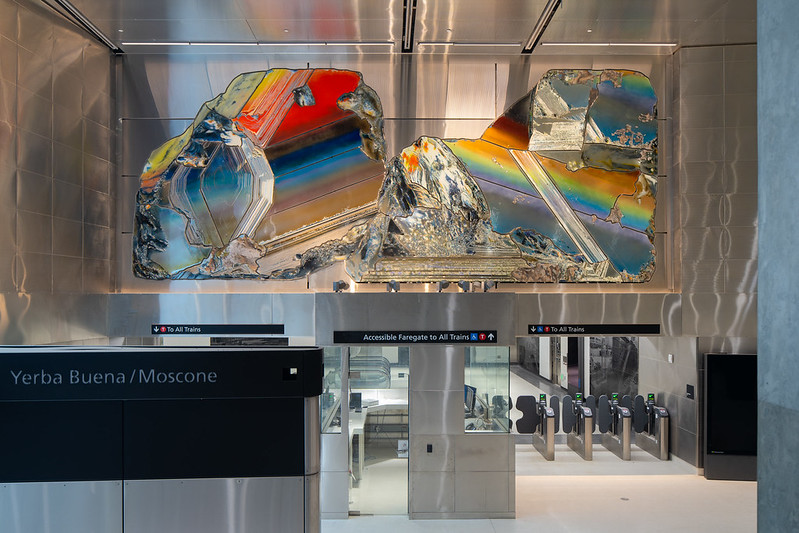 Bay Area-based artist Moto Ohtake’s wind-activated kinetic sculpture, Microcosmic, is mounted on a 40-foot light pole at the 4th and Brannan platform station. Fabricated from stainless steel the sculpture measures approximately 15 feet by 15 feet by 3 feet when stretched to its full capacity. In response to the changing weather patterns, Microcosmic’s wings move at 31 rotating points in gyroscopic circular motions and are angled differently to create opposing rotations under the same wind conditions, allowing viewers to experience an infinite number of combinations. Depending on the wind patterns Microcosmic will be contemplative at time and dynamic and energetic at others. 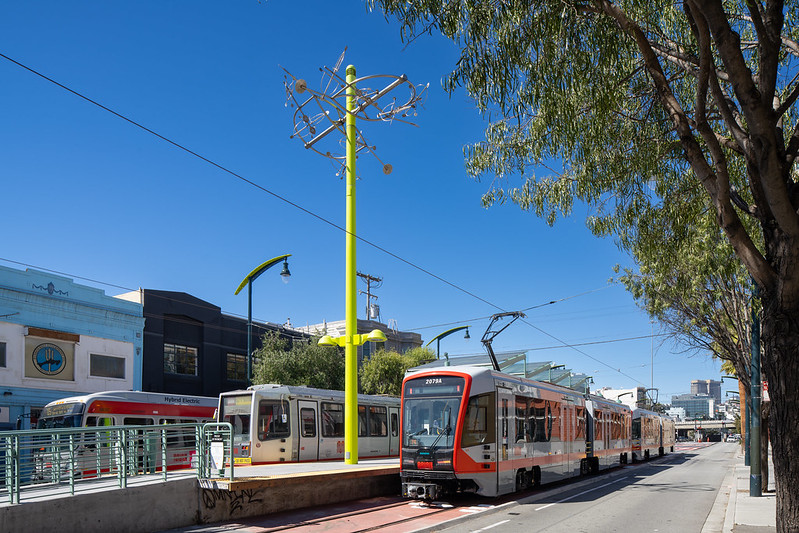 The construction barricades at Chinatown and Yerba Buena/Moscone stations feature a changing exhibition of temporary murals. Each mural is on view for approximately one year from 2014 until the completion of construction in 2018. See Temporary Art to see what is on view now. 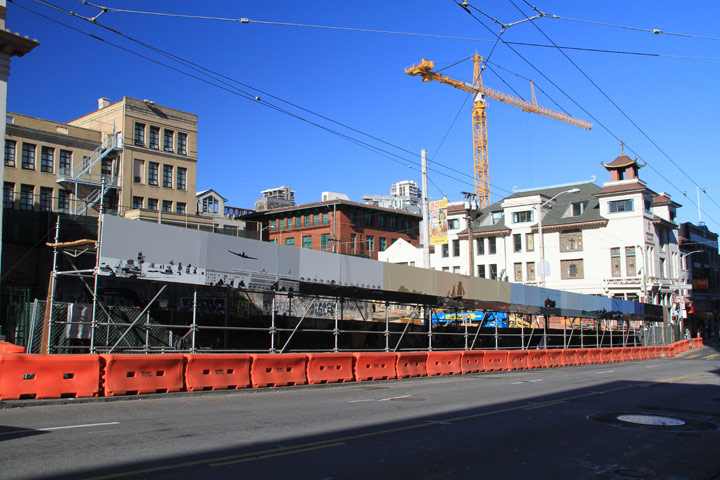 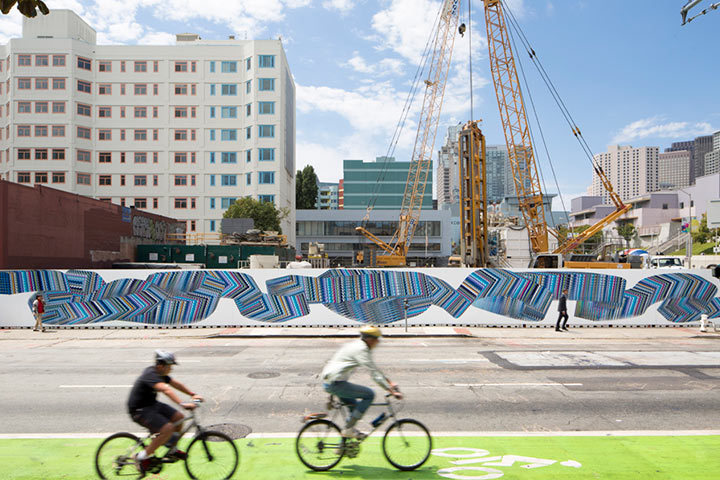