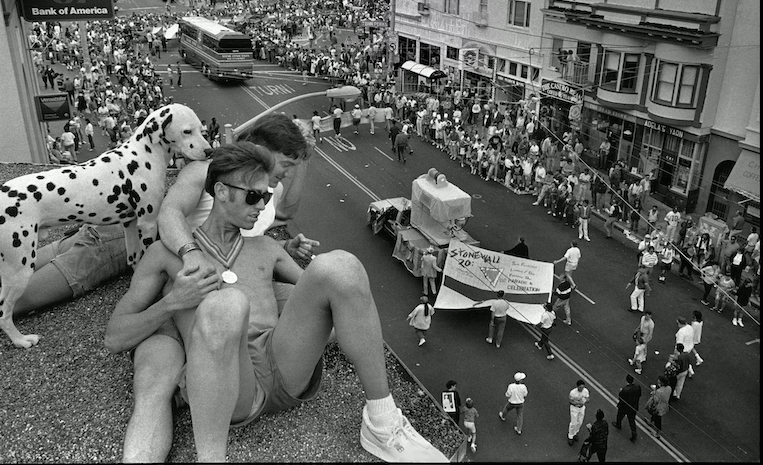 On June 28, 1970, a small group of LGBTQ people marched down Polk Street—then San Francisco’s most prominent queer neighborhood—to mark an event called “Christopher Street Liberation Day.” Commemorating the one-year anniversary of the historic Stonewall uprising on Christopher Street in New York City, the march was followed by an intimate “gay-in” at Speedway Meadows in Golden Gate Park. Fifty years later, this modest gathering has evolved into San Francisco Pride, a globally famous annual parade and celebration that welcomes hundreds of thousands of participants and spectators from around the world the last weekend in June.

Encompassing examples of photojournalism, portraiture, fine-art photography, posters and magazine covers, 50 Years of Pride honors how San Francisco’s LGBTQ community has come into its own since that first humble Pride gathering. The exhibition explores how Pride has reflected and refracted the community’s priorities, responses and activism in times of hope and despair, triumph and setback. Images drawn from the GLBT Historical Society’s archives are joined by photographs from other institutions, as well as works by over a dozen independent queer photographers.

The exhibition is curated by Lenore Chinn and Pamela Peniston, two San Francisco artists with deep roots in the city’s queer arts and culture community. “Culling through the archives at the GLBT Historical Society, we found a treasure trove of photographs, snapshots, and 35 mm color slides that tell a story of the spirit and nature of Pride and what it has come to mean both locally and internationally,” Chinn says.

Thematically, the photographs document the impact of political events and social movements on Pride. They also illustrate the transformation and diversification of the event over the years into a celebration event that represents the full spectrum of gender, race, ethnicity, class, gender identity and expression, sexuality, and ability. “Our outreach to photographers and their archives amplified our discoveries,” Chinn notes. “With the rise of gay power and an expanding movement, we saw more participation and more diversity along gender and ethnic lines.”

50 Years of Pride is a collaborative project of the GLBT Historical Society and the SFAC Galleries. “The history of Pride over the last half century in San Francisco is as complex and diverse as our city,” says the GBLT Historical Society’s executive director, Terry Beswick. “It is also a great lens through which we can examine the evolution of our LGBTQ rights and freedoms, as well as our awareness of how our movement intersects with other social justice movements. I’m so proud to have curators Pam Peniston and Lenore Chin tell these stories through this exhibit.”

This exhibition has been made possible by the generous support of San Francisco Pride. “We could not be more excited about the way 50 Years of Pride helps illuminate the complexity of our story,” says Fred Lopez, executive director of SF Pride. “It’s frequently said that LGBTQ history is American history, and that’s undeniably true, particularly here in San Francisco. Exhibitions like this highlight our unique nature as a city at the forefront of all things LGBTQ.” Additional support for 50 Years of Pride is provided by the National Endowment for the Arts and San Francisco Grants for the Arts.

50 Years of Pride opens Friday, May 15 on the GLBT Historical Society's website at gltbhistory.org. The physical exhibition will open later in 2020 on the ground floor adn North Light Court in San Francisco City Hall once the shelter-in-place order has been relaxed.

About the Curators
Lenore Chinn is a painter, photographer and cultural activist who works to create structures of personal and institutional support that both sustain critical artistic production and advance movements for social justice. Portraiture, both in painting and photography, is at the core of her visual art practice. Her current street photography chronicles a rapidly changing sociopolitical landscape. A San Francisco native, she was a founding member of Lesbians in the Visual Arts, a co-founder of the Queer Cultural Center and has been active in the Asian American Women Artists Association since the group was founded.

Pamela Peniston is a founding member and artistic director of the Queer Cultural Center, and has been one of the curators for the visual and performing arts at the National Queer Arts Festival since its inception. She has won numerous awards for her work designing and painting sets for national and Bay Area theatrical and dance companies. Peniston’s photographic interests are split among the wonder and beauty of nature, women in windows, the beauty of simple architectural elements and the community and humanity of people around the world.

Complementary Exhibition
The GLBT Historical Society is also presenting a complementary exhibition about San Francisco Pride, Labor of Love: The Birth of San Francisco Pride, 1970-1980, which documents the early years of the annual celebration. This exhibition will open on the GLBT Historical Society's website in the summer of 2020.

About the GLBT Historical Society
The GLBT Historical Society is a public history center and archives that collects, preserves, exhibits and makes accessible to the public materials and knowledge to support and promote understanding of LGBTQ history, culture and arts in all their diversity. Founded in 1985, the society maintains one of the world’s largest collections of LGBTQ historical materials. The society’s operations are centered around two sites: the GLBT Historical Society Museum, located since 2011 in the heart of San Francisco’s Castro neighborhood; and the Dr. John P. De Cecco Archives and Research Center, open to researchers in the Mid-Market district. For more information, visit www.glbthistory.org.

About San Francisco Pride
The mission of the San Francisco Lesbian Gay Bisexual Transgender Pride Celebration is to educate the world, commemorate our heritage, celebrate our culture and liberate our people. Our annual event on the last weekend of June is the biggest gathering of the LGBTQ community and allies in America as well as San Francisco’s largest outdoor event, consisting of a two-day Celebration in Civic Center plus a parade down Market Street with more than 280 contingents marching. Since 1997, SF Pride has awarded over $2.5 million in proceeds to local nonprofit LGBTQ organizations and those organizations working on issues related to HIV/AIDS, cancer, homelessness and animal welfare. For more information, visit http://www.sfpride.org/.

Graphics for Reproduction
A press packet of photographs featured in the exhibition is available for use in media reporting about the exhibition. Contact Mark Sawchuk at mark@glbthistory.org

Monuments and Memorials in the Civic Art Collection