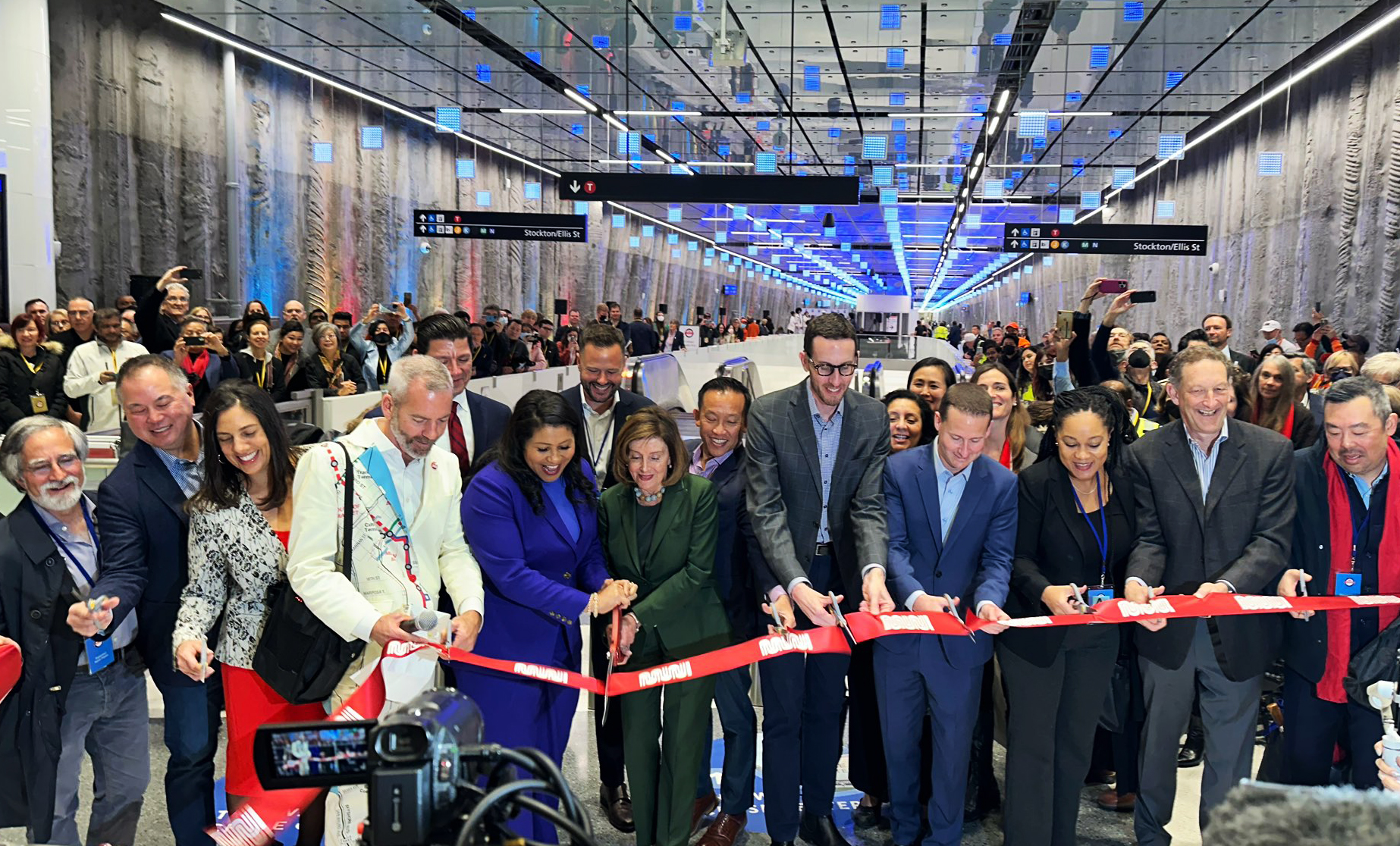 With an above-ground station in SoMa at 4th and Brannan and subway stations at Yerba Buena/Moscone Center, Union Square/Market and Chinatown–Rose Pak, the Central Subway Project is critical in connecting the southeastern and the northeastern parts of San Francisco, supporting economic vitality and cultural growth in the Visitacion Valley, the Bayview, Dogpatch, SoMa, Union Square and Chinatown neighborhoods.

“The Central Subway will instantly become a crucial artery in San Francisco: connecting families to a booming corridor in the heart of our City,” Speaker Nancy Pelosi said.  “This new line is a strong step forward for justice: making it easier for parents to get to work, children to get to school and small businesses to attract more customers.  As the proud representative of San Francisco, it has been my privilege to join so many leaders in the two-decade-long effort to build this Subway: another step toward our vision of a transit-first City.”

“The Central Subway is a transformative project for our City and a critical bridge to connect our neighborhoods and bring people together,” said Mayor London Breed. “This project is also about our economic recovery. As our City is still recovering from the impacts brought by the COVID-19 global pandemic, our recovery efforts rely on an efficient and reliable transportation system. It’s also about making life easier for residents. Not only will it help traffic congestion on our street, it will also provide a faster and more convenient way for us to get to where we need to go.”

“The Central Subway is a success story, and this victory will be enjoyed for decades to come by San Franciscans and visitors alike,” said Jeffrey Tumlin, SFMTA Director of Transportation. “We appreciate the community’s patience as we worked tirelessly to bring to life their vision of metro service from the southeastern portion of the city to Chinatown. Our staff members have poured their hearts and souls into this project, including today’s opening, and we thank them and look forward to applying what we have learned to future SFMTA initiatives.”

The T-Third will now continue north at 4th & King, transition into underground tunnels with a portal under the I-80 freeway, cross under the BART and Muni Metro tunnels beneath Market Street and then continue under Stockton Street to Washington Street.

The T-Third’s new route means that it will no longer turn onto King Street and run along the Embarcadero and the Market Street subway. The K Ingleside will also now travel between Balboa Park and Embarcadero Station. Customers accessing those stops on Embarcadero at Folsom, Brannan and 2nd & King may now transfer to the N Judah at Powell Street or 4th & King.

This unique project features complex and award-winning designs. The Chinatown station is 120 feet deep, almost equivalent to a twelve-story building underground. The International Tunneling Association awarded Chinatown Station “Project of the Year” for its sustainability aspects and community involvement; Union Square/Market Street won an award for innovative solutions for underground space utilization. Most of the funding for the Central Subway Project is provided by the U.S. Department of Transportation and comes to about $1.953B.

This project has been successful in avoiding disruptions to existing BART and Muni service, and has not impacted travel through the Stockton Tunnel, despite its proximity.

“The Central Subway will help make San Francisco even more connected and vibrant,” said Senator Scott Wiener. “Residents and tourists alike will have quicker and more reliable access to Chinatown – one of the densest neighborhoods in the city. We’ve worked hard to make this happen for two decades. This is a victory for all San Franciscans, and for the future of our city.”

“I’m proud of the state’s role in providing hundreds of millions of dollars in funding to help build the Central Subway. New transit lines are the only way to ensure San Francisco’s growth because we simply can’t fit more cars on our streets. In addition, such state and local partnerships demonstrate that all neighborhoods deserve the convenience and economic vitality public transit can bring. In fact, connecting underserved communities to other parts of a city is now a priority in other transportation projects throughout California,” said Assembly Budget Chair Phil Ting.

“The opening of the central subway is just in time for the city’s post-pandemic economic recovery. The Central Subway can help to bring people back to work and revitalize our city's downtown core at a time it is desperately needed,” said Assemblymember Matt Haney.

“The Central Subway is a critical project that will connect the densest neighborhoods on the West Coast and is especially important for Chinatown residents who rely on public transit, said David Chiu, San Francisco City Attorney. “It will help revitalize our community as we recover from the pandemic, by bringing residents and visitors alike to our nation’s oldest Chinatown, Union Square, our downtown neighborhoods and beyond. I am thrilled to see decades of hard work pay off as San Francisco fully opens the Central Subway.”

“The Transportation Authority congratulates the SFMTA and celebrates the expanded Central Subway service connecting communities from Chinatown to Visitacion Valley. We are proud to have provided 20% of the funding for this corridor from our voter-approved half-cent transportation sales tax program and other sources. This generational investment will reduce travel times in our most congested neighborhoods and more seamlessly connect the entire region,” said District 8 Supervisor Rafael Mandelman, who serves as Chair of the San Francisco County Transportation Authority.

“Central Subway was the first project I worked on when I came to Chinatown CDC over a decade ago. So the feeling of finally seeing this project go full service is hard to describe in words,” said Malcom Yeung, Executive Director, Chinatown Community Development Center. “I can only give thanks to all of the city leaders - including our late Mayor Ed Lee and our Present Mayor London Breed; Chinatown community leaders like Gordon Chin, the Chinese Chamber and Chinatown TRIP; and neighborhood leaders - particularly in Union Square and North Beach - that made this happen.  Most of all, thank you to the late Aunty Rose Pak, who through sheer force of will made our community believe this could happen. This project isn’t for Rose, however, it’s for San Francisco.  And Rose would have wanted it that way.”

“The Central Subway is beneficial to the youth and families we serve, building bridges and creating pathways between so many rich and vibrant cultural communities.  It further solidifies our commitment to strengthening the fabric of our community throughout San Francisco,” said Tacing Parker, Senior Executive Director, Bayview Hunters Point YMCA.

By expanding transit options, the new T-Third line will also bring the City one step closer to its goal of reducing greenhouse gas emissions as well as provide enhanced connections to BART, Muni Metro, Chase Center, Oracle Park and Caltrain. The Central Subway will offer special event day service for fans attending games and concerts at Chase Center, offering an expedited method of transit to the arena for fans coming from San Francisco and the East Bay via BART. Using the transfer at Powell Station, fans can walk underground to Union Square/Market Street Station to board the S Shuttle Mission Bay, southbound to Chase Center. Additionally, fans can ride Muni to the arena on event days, for free, with their event tickets.

“The Central Subway will be a key part of the event day experience for so many Warriors fans and concert goers, as it will be their most efficient and convenient means of getting to and from Chase Center,” said Brandon Schneider, President & COO of the Golden State Warriors. “As with our privately financed arena, we view our financial investment in the City’s Transportation Management Plan as foundational to our ongoing commitment to San Francisco, and the entire Bay Area.”

“The Giants are thrilled about the opening of the Central Subway. The project is a big investment in access to transit and makes public transportation in San Francisco even stronger. Giants fans, visitors to Oracle Park, and future Mission Rock residents, neighbors, workers and guests will now have even more options for connectivity to the neighborhood,” said Larry Baer, President and CEO of the San Francisco Giants.

“Art connects us all. These ten new public works of art not only add beauty and character to the stations, but also provided an opportunity for locally, nationally, and internationally renowned artists to showcase their talents and contribute to the cultural vibrancy of our City,” said Ralph Remington, Director of Cultural Affairs. “I thank the project team, city and community partners and each of the twelve artists for working together to create these unique and beautiful installations that enliven our urban environment. I can't wait for San Franciscans and visitors to experience and connect with these new works as they navigate San Francisco with the newly expanded Muni line.”

Public art in our Muni stations is important not only for its aesthetic or beauty but because it also helps draw out the identity of a space, aids in the understanding of the historical or cultural significance of a neighborhood and builds a connection between the visitor and surrounding community.