Market Street Crossroads Will Be On View Through March 2023 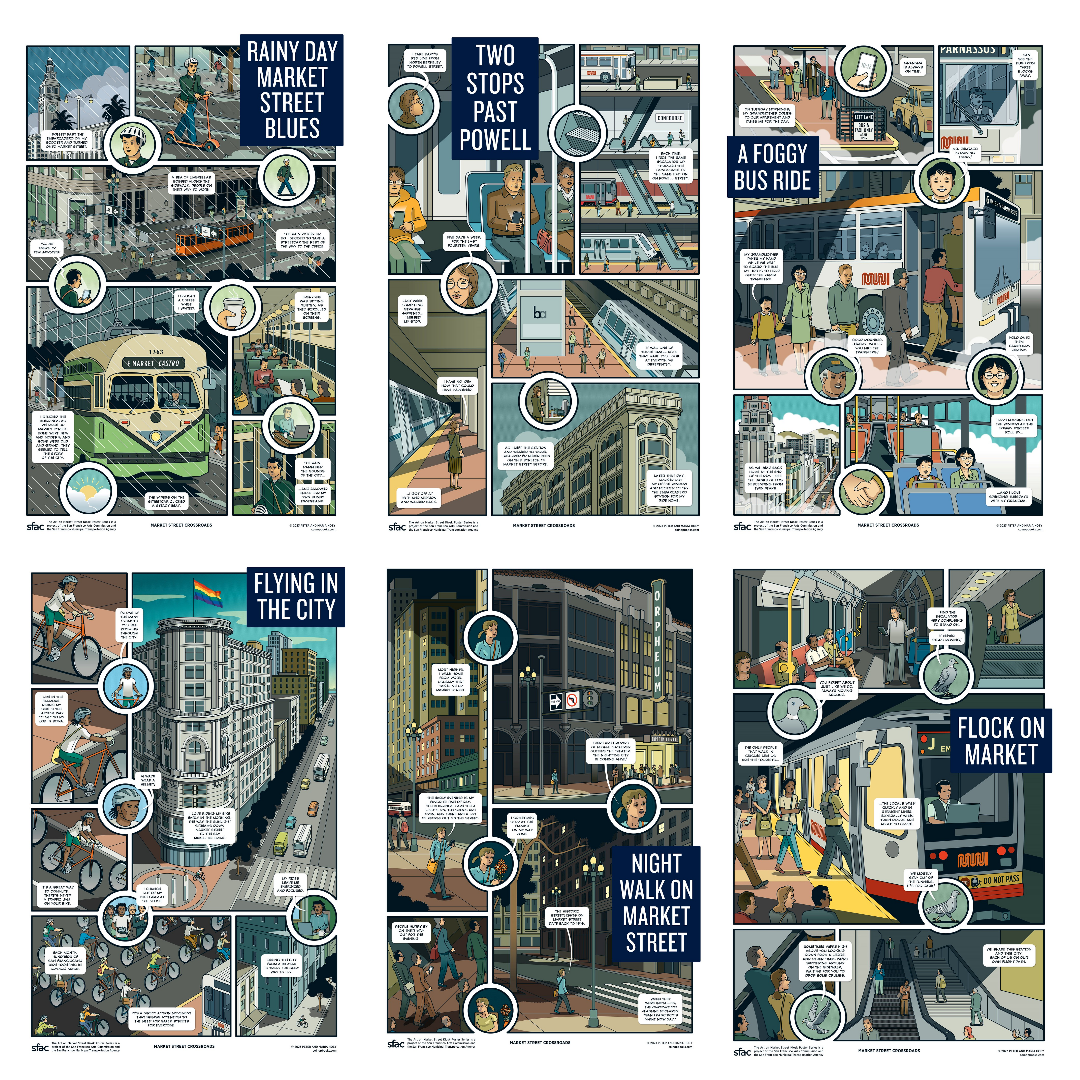 SAN FRANCISCO, January 25, 2023 – The San Francisco Arts Commission (SFAC) is thrilled to announce the installation of Market Street Crossroads, the first of four installments of posters that have been commissioned for the 2023 Art on Market Street Poster Series program.

Market Street Crossroads features six illustrated vignettes showcasing the multitudes of people who pass through Market Street at different times each day utilizing different modes of transportation. The works will be on view along Market Street between Hyde Street and the Embarcadero at 18 SFMTA transit shelters through March 2023.

“The San Francisco Arts Commission is thrilled to kick off our 2023 Art on Market Street poster series with a set of posters that beautifully encapsulates San Francisco’s iconic main thoroughfare,” said Ralph Remington, Director of Cultural Affairs. “I highly encourage residents and visitors alike to stop by and take a stroll along Market Street to view these wonderfully illustrated posters.”

These six unique poster designs were created by siblings Peter and Maria Hoey, an award-winning illustrator-and-comic art team who have independently produced and published their comics under the name COIN-OP since 2008.

Passersby will find various subject perspectives of different commuters featured, including a narrative told from the viewpoint of a Market Street pigeon. The unifying element of the series is the multiplicity of people and animals on Market Street and their stories.

Each poster investigates a different mode of transportation that can be found on Market Street: Muni bus, subway, biking, and walking. Different times of day and night as well as various weather conditions, such as fog, rain and sunshine are also highlighted.

“When we saw the call for artists for this project, we knew right away that we wanted to make our comic about Market Street,” shared artist Maria Hoey in an artist statement. “I used to walk down Market Street to catch the bus, waited and daydreamed at these kiosks. My brother and I both agreed that we should make a series of stories that would speak to and entertain the people waiting there today.”

“The focus of our “Market Street Crossroads” is the street itself, both its utility and its beauty, and ultimately the role that it plays in each of the six narratives,” said Peter Hoey. “It’s about the idea of Market Street as a crossroads. A crossroads of people and lives, the key elements that make living in The City truly rich.”

Featured in the six vignettes, you will find:

The 2023 Art on Market Street Poster Series theme, “Comics 2.0”, is a continuation of the 2022 poster series theme based on the artistic medium of comics. In addition to artists Peter and Maria Hoey, other artists that have been selected to be featured in 2023 include: Rina Ayuyang, Minnie Phan and Triple Dream Comics.

About the Art on Market Street Poster Series
The San Francisco Arts Commission has commissioned new artworks from artists on an annual basis since 1992 in partnership with the San Francisco Municipal Transportation Agency (SFMTA) and Clear Channel. Now in its 31st year, the program has partnered with over 120 artists since its inception, commissioning over $1.2 million worth of art, showcasing a wide breadth of artistic styles, themes and topics centered around San Francisco. Up to four artists are commissioned annually by the Arts Commission to create a series of at least six unique works of art that responds to a theme specific to San Francisco.