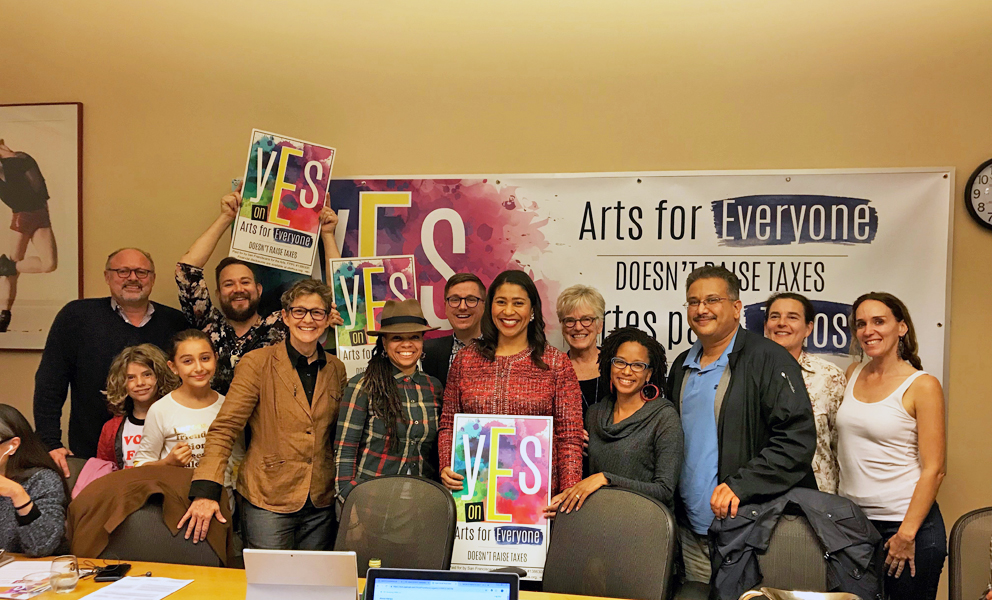 The passage of Proposition E in November 2018 by a whopping 75% majority is a testament to the commitment and vibrancy of San Francisco's arts and cultural communities. As the Directors of the San Francisco Arts Commission (SFAC), Grants for the Arts (GFTA), and the Mayor's Office of Housing and Community Development (MOHCD) we are incredibly grateful for your advocacy and we are committed to ensuring that the Hotel Tax allocation for the arts sustains the important work you are doing throughout the City.

We wanted to take a moment to recap the significance of Prop E and its impact on municipal funding for the arts. First, the basics:  Prop E restores the historic Hotel Tax allocation for arts and cultural programming. As hotel tax revenue grows, so will city funding for the arts with an annual cap set at 10%. Should hotel revenues decrease, the arts and culture allocation will fall no more than 10% in any given year.

The legislation increases investments in existing arts and cultural programs, such as Grants for the Arts, the Cultural Equity Endowment and the city-owned Cultural Centers, all of which were funded through the City's General Fund prior to the passage of Prop E. It also includes funding for two new arts and cultural priorities: the Arts Impact Endowment and Cultural Districts. The following is a breakdown of each of the five funding buckets:

1. Grants for the Arts - Under the oversight of the City Administrator's Office, GFTA provides general operating support to arts nonprofits. Prop E establishes baseline funding of $16.3 million for GFTA from the Hotel Tax.

5. Arts Impact Endowment - Jointly administered by the SFAC and GFTA, the new $2.5 million Arts Impact Endowment addresses needs in the arts and culture sector. As articulated in the legislation, the funding priories for this new fund are determined by a Cultural Services Allocation Plan (CSAP), which will be prepared every five years and approved by the City Administrator and the Arts Commission.

On March 4, the San Francisco Arts Commission and the City Administrator unanimously approved the 2019-2024 CSAP, which outlines the four priority areas that the Arts Impact Endowment will support:  1) Arts Education; 2) Affordable Space; 3) Arts Organizations Core Support; and 4) Individual Artists Support. These priority areas were determined after engaging the community at open houses throughout the city, through targeted mapping activities of key stakeholders and through an online poll. To date, over 3,500 people have provided quantitative and qualitative input and recommendations. Please take a moment to read the approved CSAP.

The CSAP clearly outlines the next steps the City will take to meet the community's desires for both timely access to funding as well as an extended period for assessing community need. The proposed allocations in the CSAP do not indicate specifically what types of programs will be funded through the Arts Impact Endowment. In order to hone these recommendations into actual funding amounts and implementation approaches, City staff from the SFAC and GFTA will develop funding recommendations that address the four aforementioned impact areas with advisory input from an appointed Community Working Group.

City staff will appoint the Community Working Group based upon areas of expertise and diverse representation. We are now accepting applications for Working Group participants.

It's important to note that all Arts Impact Endowment funds will follow City policies and be competitively awarded through a request for proposals.

We hope this update has helped clarify the role Prop E now plays in City funding of arts and culture. If you still have questions, we encourage you to submit them to us via e-mail at: ARTS-Impact@sfgov.org.