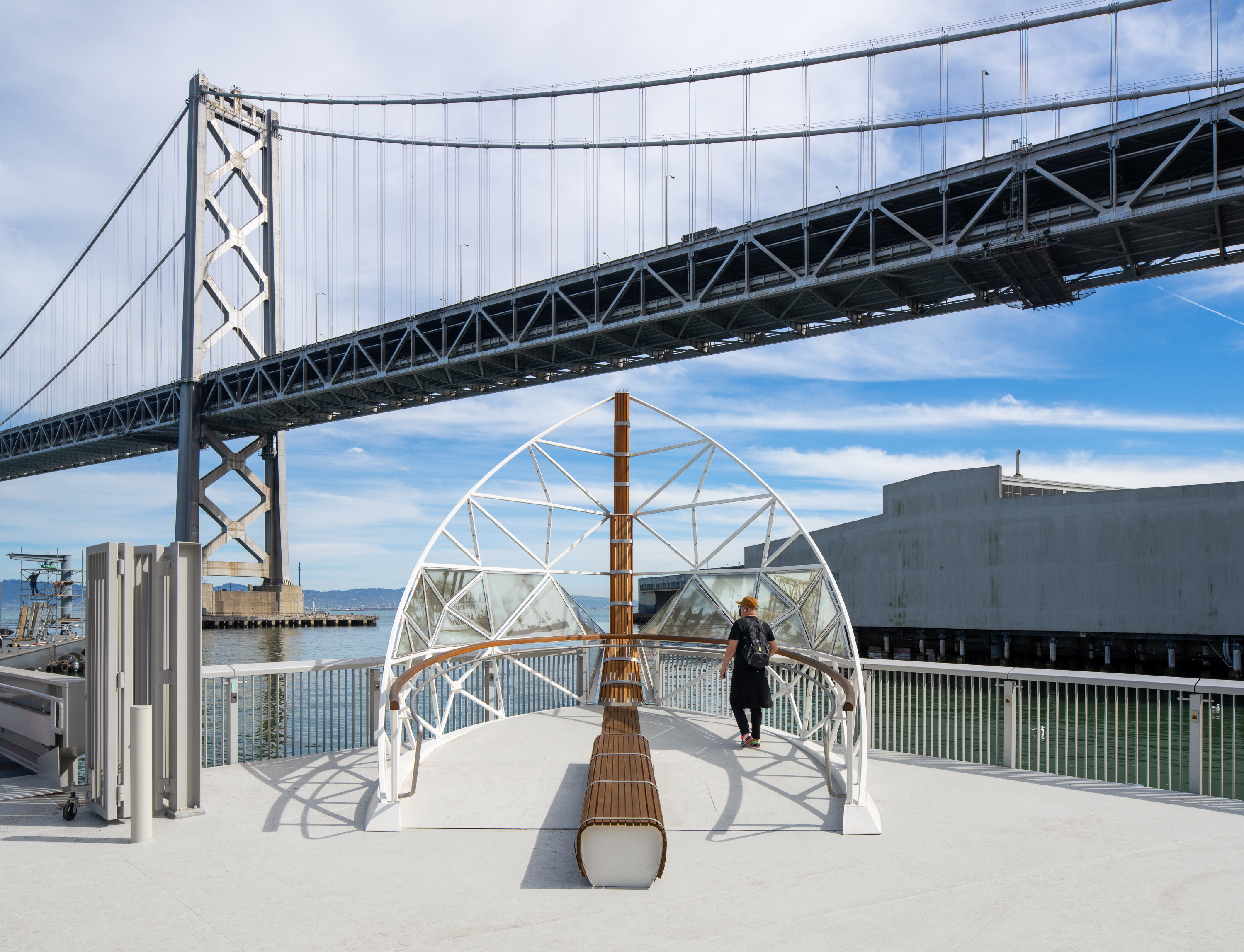 San Francisco, CA — Mayor London N. Breed, San Francisco Public Works, and the San Francisco Fire Department (SFFD) today celebrated the completion of San Francisco’s new floating Fireboat Station No. 35, an innovative project that meets the present-day needs of maritime-based operations for first responders. As the City’s newest fire station and the only one located directly on the waterfront, the facility is built to remain functional during and after a major earthquake and will adapt to projected sea-level rise.

“Part of being able to respond quickly and efficiently to emergencies is investing in state-of-the-art equipment to support our first responders,” said Mayor Breed. “The new Station No. 35 is not only seismically resilient, but it will also rise and fall with the Bay tides and meet the challenges of anticipated sea-level rise driven by climate change. I want to thank Public Works and the entire project team for designing and constructing a station that will serve San Francisco’s waterfront for generations to come.”

Located at Pier 22 ½, just north of the Bay Bridge, the new SFFD station is home to the City’s fleet of fireboats and marine rescue watercraft and serves as the living quarters for on-duty crews assigned to Station No. 35. The new facility replaces the old firehouse, which fell short of modern building code requirements and was too small and outdated to house the crew and equipment adequately. Station No. 35 supports a rotating staff of 21 uniformed SFFD personnel, with seven on duty at any given time. Engine 35, assigned to the station, averages 2,260 calls a year.

“While our older Station 35 holds a dear and important part in the San Francisco Fire Department’s history, the new floating Station 35 and its members stand ready to make new history,” said San Francisco Fire Chief Jeanine Nicholson. “We are proud to be the first floating fire station in the country and we are grateful to be able to continue to serve our beloved city.”

The two-story, 14,900 square-foot structure is built on top of a 173-foot-long-by-96-foot-wide steel float and anchored by four guide piles. This design allows the structure to rise and fall with the natural tides of the Bay, King Tides and projected sea-level rise. The project did not involve any alterations to the historic Fire Station No. 35 building, which is designated as San Francisco Landmark No. 225 and is also a contributing resource to the Port of San Francisco Embarcadero National Register Historic District. The existing building, constructed in 1915 for the Pan-Pacific International Exposition, will continue to house Engine 35 and be used to store equipment.

The $50.5 million rebuild project was funded by the second phase of the Earthquake Safety and Emergency Response (ESER) bond, which passed with 79 percent approval of San Francisco voters in June 2014. Public Works managed the design-build project on behalf of SFFD, with the work was carried out by Swinerton-Power JV team made up of Power Engineering Construction Co., Swinerton, Shah Kawasaki Architects, and Liftech Consultants.

The City’s fireboats, the St. Francis, the Guardian, and the Phoenix, have multiple land and water roles. Not only are they used to responding to on-water emergencies, such as capsized boats, distressed swimmers, and bridge jumpers, they also are responsible for fighting fires on or along the Bay that are inaccessible to land-based apparatus. The boats also can serve as fire hydrants and draw water directly from the Bay to assist land-based firefighting. With the new station, the fireboats are easier to access, allowing the crew at Station No. 35 to respond to emergencies faster.

“This new Fireboat Station 35 represents sea-level-rise adaption and innovation at its best,” said Port of San Francisco Executive Director Elaine Forbes. “The men and women of the San Francisco Fire Department assigned to the station play a critical role in ensuring the safety of our waterfront and local communities. The fireboats have come to the rescue in the past and will stand watch for generations to come because of this new facility.”

Additionally, the project boasts new public artwork commissioned by the San Francisco Arts Commission. Titled Bow the artwork by artist and landscape architect Walter Hood of Oakland-based Hood Design Studio, creates an observation platform on Pier 22½ with sweeping views of the Bay and Bay Bridge. The artwork, suggesting the bow of a boat, is made of wood, painted steel, aluminum, and glass and is partially enclosed by translucent panels.

“The historic photos printed onto the artwork’s glass panels were selected by the artist in close partnership with the San Francisco Fire Department to honor the important history of the fireboats and their heroic role in significant events along the City’s waterfront,” said Ralph Remington, the City’s Director of Cultural Affairs. “Walter Hood took the work’s extraordinary location on The Embarcadero into careful consideration by orienting the work specifically to highlight views of the two fireboat stations, the fireboats at dock, and sweeping vistas of the bridge and the Bay. Not only does San Francisco have a wonderful new fire station, but the artwork, made possible through funds from the City’s Art Enrichment Ordinance, provides the public with a beautiful vantage point to enjoy it.”