The Summer of Love as Seen by Local Artists 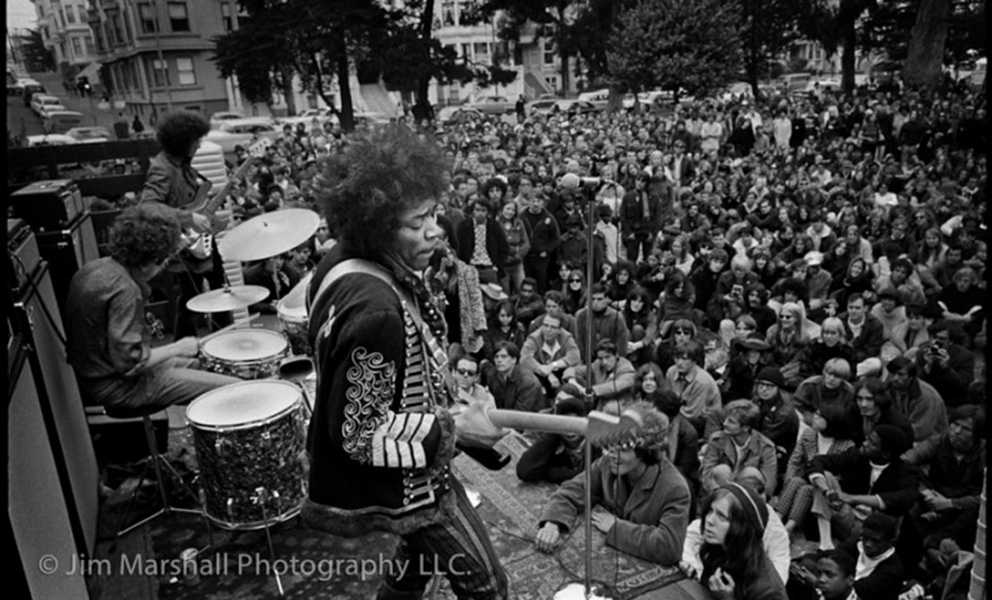 SAN FRANCISCO –As part of a citywide celebration of the 50th anniversary of the Summer of Love, the San Francisco Arts Commission (SFAC) will offer two opportunities for the public to reflect on this historical event. Opening on January 26 at City Hall, Jim Marshall: Summer of Love features 80 works by the iconic photographer taken during his time in San Francisco in the 1960s. Starting in spring 2017, the Arts Commission’s popular Art on Market Street Poster Series will explore the Summer of Love and its cultural impact through contemporary work by local artists Sarah Hotchkiss, Kate Haug and Deborah Aschheim.

“Most people associate the Summer of Love with sex, drugs, rock ‘n’ roll, but it was also the culmination of a number of radical shifts in San Francisco’s cultural landscape that encouraged the democratization of art, bringing it out of traditional institutions and into the street and local communities,” noted Director of Cultural Affairs Tom DeCaigny, “These developments shaped the San Francisco Arts Commission’s mission to ensure equal access to the arts throughout the city, so we felt it was important to engage with the anniversary by presenting artworks that reflect this historic event in some of the city’s most public spaces.”

In a 2014 article in The New York Times, celebrity photographer Annie Leibovitz called Jim Marshall, "the rock 'n' roll photographer." During his over 50-year career he created more than 500 album covers and captured iconic and candid portraits of Janis Joplin, Jimi Hendrix, Johnny Cash, Neil Young, Bob Dylan, the Grateful Dead, The Beatles, and countless others. Jim Marshall: Summer of Love was organized by SFAC Galleries Director Meg Shiffler who oversees the Art at City Hall Program. According to Shiffler, “Jim Marshall’s work is truly iconic. His images are permanently part of our collective vision of the 1960s. This exhibition is a treasure trove of photographs that capture the vibrancy of the Haight and the various scenes and movements that occupied San Francisco during that pivotal time in history. What makes Marshall’s work special is that he was a part of the scene he was photographing so the images are intimate, immediate and raw.”

The popular Art on Market Street Poster Series features new work by local artists on an annual basis shown in the bus kiosks along Market Street between the Embarcadero and 8th Street. With the advent of the 50th anniversary, the Arts Commission invited artists to reexamine the Summer of Love. The selected artists, Sarah Hotchkiss, Kate Haug and Deborah Aschheim will each present very distinct takes on the event. Hotchkiss examines the “diverse Bay Area political, cultural and social scenes of 1967” through local mainstream and underground media published during that period, such as the San Francisco Chronicle, Haight Ashbury Free Press and the Black Panther’s Black Community News Service. Haug’s posters are a series of Sumer of Love trading cards featuring an array of personalities who were influential in the Bay Area during the Summer of Love era, including Timothy Leary, Allen Ginsburg, poet Lenore Kandel, Joan Baez, Jerry Garcia, Janis Joplin, Emory Douglas and others. Aschheim explores the “intersection of political and social utopian ideas that drew people to San Francisco” through detailed pen and ink drawings of protestors, the Diggers and the Black Panther community.

In addition to the exhibition at City Hall, the Bay Area audiences can also see work by Jim Marshall in two concurrent projects. American Civics is a collaboration between Shephard Fairey and Jim Marshall Photography, LLC. Fairey has interpreted Marshall's portraits of icons such as Johnny Cash, Cesar Chavez and Fannie Lee Chaney, as human faces behind enduring social issues such as voting rights, mass incarceration, and worker's rights. These images are on two billboards in San Francisco, with more coming in 2017. (http://americancivics.com/)

Marshall's portraits also grace the windows of the San Francisco Unified School District building across the street from the SF Jazz Center on Franklin Street. The installation features photos of legendary jazz musicians including Dizzy Gillespie, Miles Davis, John Coltrane, Count Basie, Anita O'Day, Charles Mingus, Vi Redd, and Nina Simone, among many others. The installation will be on view through May 2017. (https://www.sfjazz.org/jimmarshall)

The award winning book, The Haight: Love, Rock And Revolution, by Joel Selvin with photography by Jim Marshall is another fantastic resource on the counter culture movement in the San Francisco Bay Area in the 1960s.